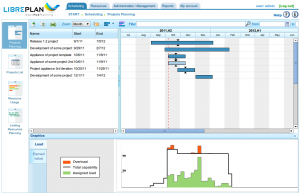 The global company view screen is the home screen you are redirected after login. You can easily see in a chart all the key information about the status of each project: 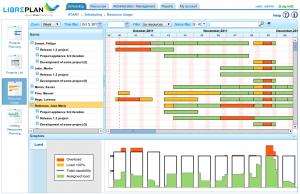 In LibrePlan resources are shared among projects and with the resource load view you can analyse their load status in a graphical and powerful way. You are able to discover when they are overloaded or when there is room to accept more work.

The screen consists of a chart with a row per resource where the tasks he has assigned are drawn in a timeline. Besides, colors easily allow to identify overload periods as well as free allocation gaps. 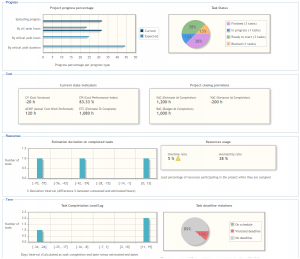 The indicators panel is a project planning perspective which enables to know theproject status in a fast and easy way. It sums up information and contains a set of metrics and charts which analyze how well a project is performing from several points of view: 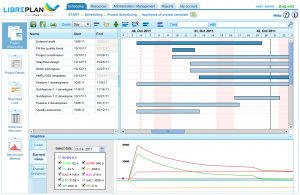 Earned Value Management is the gold standard method for measuring and managing achievement in projects. It is used on projects large and small: From buildings to transatlantics, opera to aircraft to zoos and even Olympic games.

LibrePlan provides this technique transparently integrated in the natural cycle of project planning and is calculated for you in an effortless way. It can be applied with project or global company scope. 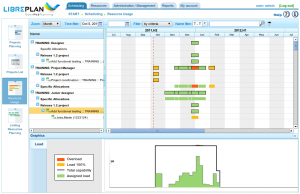 A distinctive feature in LibrePlan is the possibility to analyse in a graphical way the load by criterion, e.g., by resource skills. 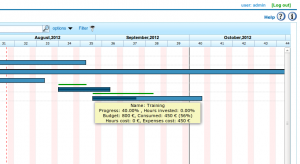 In LibrePlan you measure and control the project cost in a natural way and, besides, you analyze it in an integrated way with the project planning.

Projects have a budget in money and in hours managed through the WBS and you track it through the hours dedicated by the workers during project execution and through the expenses spent in the different project activitities. Hours can have different cost and you specify it by grouping the sources in cost categories.

The cost is incorporated into the Gantt chart and is represented graphically through several bars which visually sum up the budget status of each task. 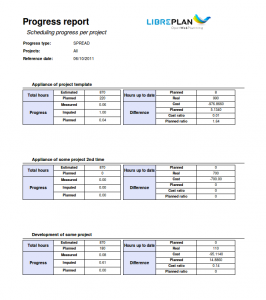 Among the existent reports you can find for example:

Reports are provided in three formats: